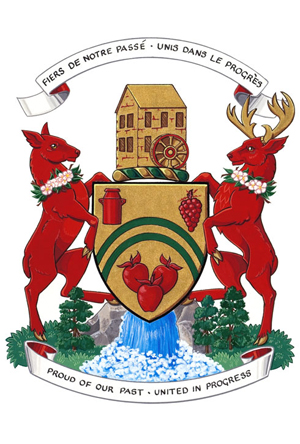 Proud of our past – United in progress

Incorporated in 1806, Frelighsburg was originally settled in the 1790s by American Loyalists, including Abram Freligh, a physician of Dutch origin, who moved from New York State and gave his name to the village. The stone mill built by his son, Richard, in 1839 at the river’s edge is a registered historic monument. The Anglican (1880) and Catholic (1883) churches whose spires crown this jewel of a village, attest to the cultural diversity that remains an important part of its fabric to this day. Other highlights include the Joseph Landsberg general store (1879), at one point of the most important general stores in the region, as well as the convent (1914), now the elementary school in the village.

Over 200 years later, Frelighsburg maintains its historic architectural integrity that blends wood and brick construction in a Loyalist style. While remaining an important apple-growing agricultural region, the beauty and charm of the village and the surrounding rolling hills has attracted new residents from many other areas, including a rich community of artists. In addition to Frelighsburg’s historic heritage, tourists and visitors are drawn by the combination of charming landscapes, local food and drink specialties, galleries and a stunning natural setting.